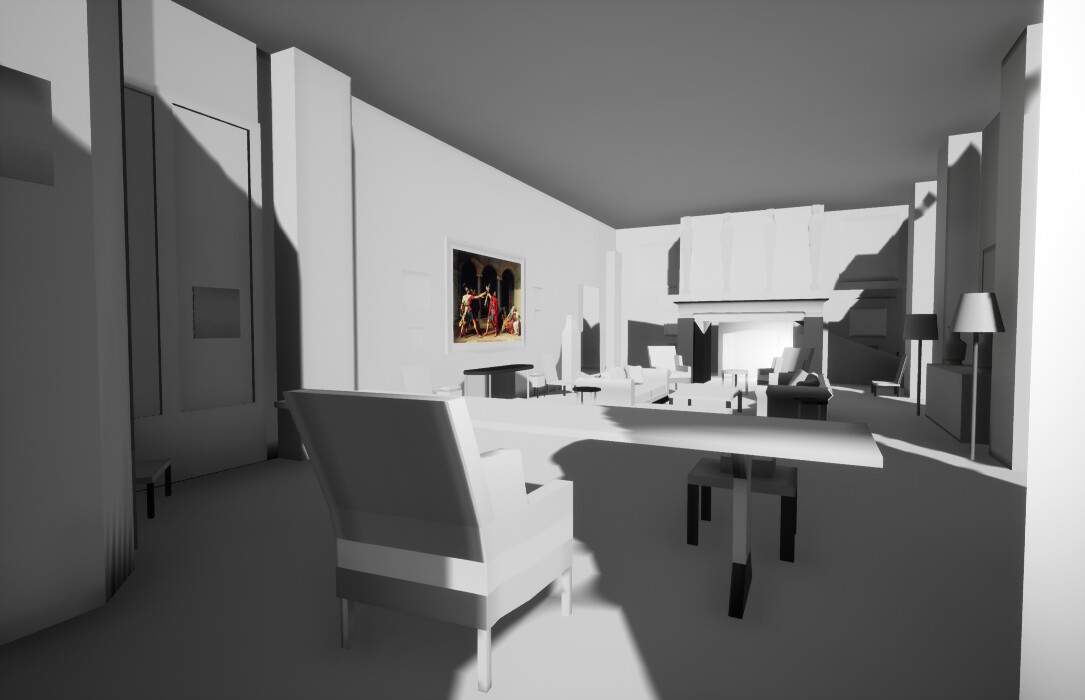 Ever since I saw the TV show Gotham I fell in love with the set designs.  I finally decided to put some of the things I've learned recently into action.

Luckily for me, many of the seasons of Gotham are on Netflix.  I made it a habit to grab reference as I watched, but even then I ended up looking at some behind the scenes footage for additional angles of the room. 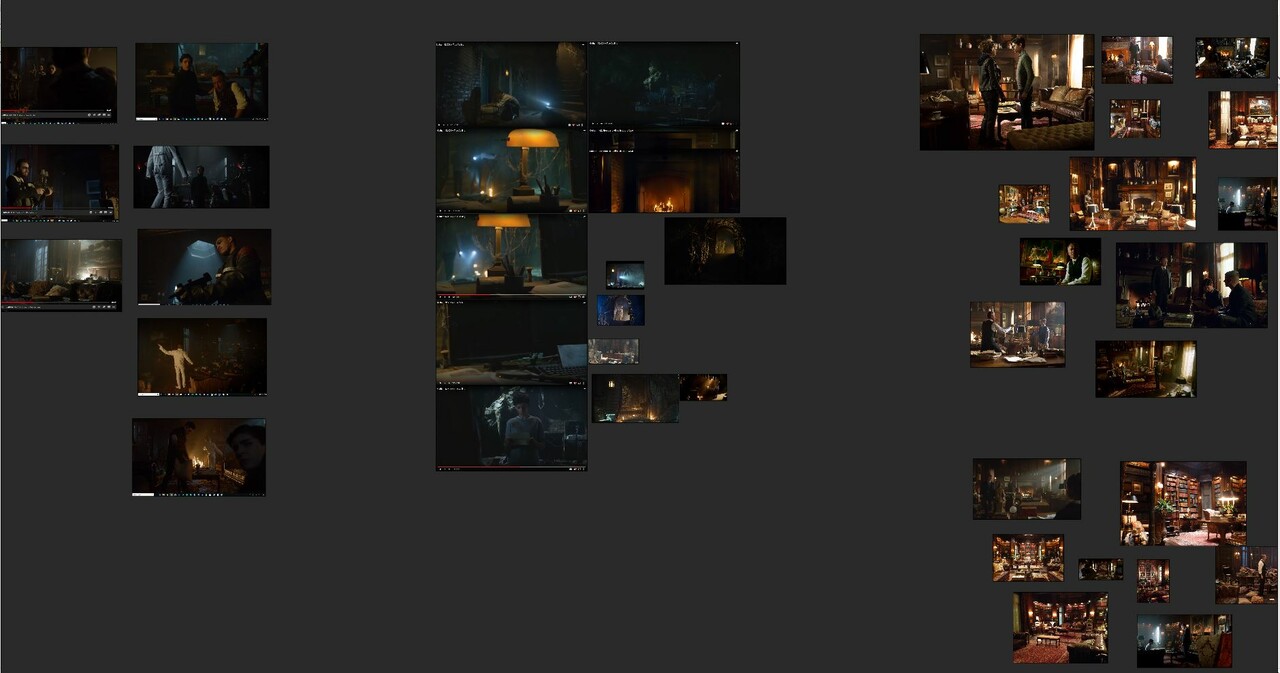 From previous classes I took at the CGMA, I found out about PureRef; a program system that allows for easy viewing of reference images.  Using this handy program, I divided my reference footage up by

1.) different "reach goals" I had beyond the core room to potentially implement if I wanted to take time with the project

2.) Similar angles in the room that informed me of different sides of the same set of objects

After having done this, I was ready to move on to the blockout phase.

The above is one of my final blockout shots.  This came after a lot of tweaking to make sure everything was proportionally accurate, and using image planes to perfectly recreate the room from different angles.

The trickiest part of this phase is what extensive reference imaging revealed: TV sets can do pretty much whatever they want as long as the audience doesn't catch on to your tricky ways.  I'll go into these things more in detail later, but for now the important thing is: now everything is proportional to each other!

Once I was confident I had the proportions down in Maya, I brought the scene into Unreal Engine. 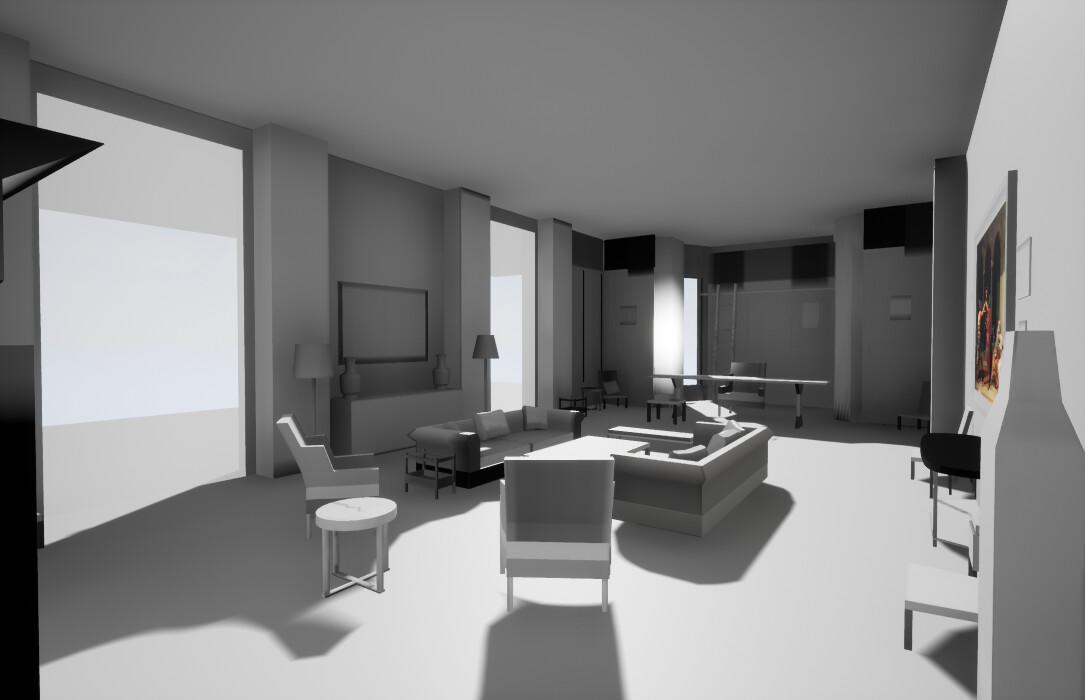 Bringing in the blockout now allows for me to directly overwrite the blockout meshes with their finalized counterparts.  Lighting is easier to plan out now as well.  Potentially it might be necessary for me to keep in mind the man-made light sources in the room.

Now if you look at shots of this room in the show, you'll notice there are a lot of tiny knick-knacks that really fill out the scene.  For now I've opted to ignore these in the blockout phase due to their complexity.  I have to admit, I'm a little eager to see how things fit together

Since these couches were the biggest thing in the scene, they were actually pretty informative to the entire space.  The scene I'm recreating also happens to have a life sized suit of armor, so using that I was able to get a better idea of what a character might size up to in the scene as well.

After having obtained my original reference footage, I decided on adding an extra step to my normal process:  research if anyone has done this before.

Now some artists will argue that looking at other art can cause you to recreate art and be uninformed.  I can see this as a vaild argument, but in some respects I think looking at how other people have achieved similar targets can keep you from "recreating the wheel".   The project ahead of me is a long one, and knowing how much of a perfectionist I am, I was eager to see other processes.

I ran into this pretty handy article that mentioned exactly what I was hoping it would: https://www.ronenbekerman.com/3d-modeling-how-to-the-bohemian-sofa-marvelous-designer/

I had planned on learning Marvelous Designer on the curtains in this shindig, but hey. Why not? 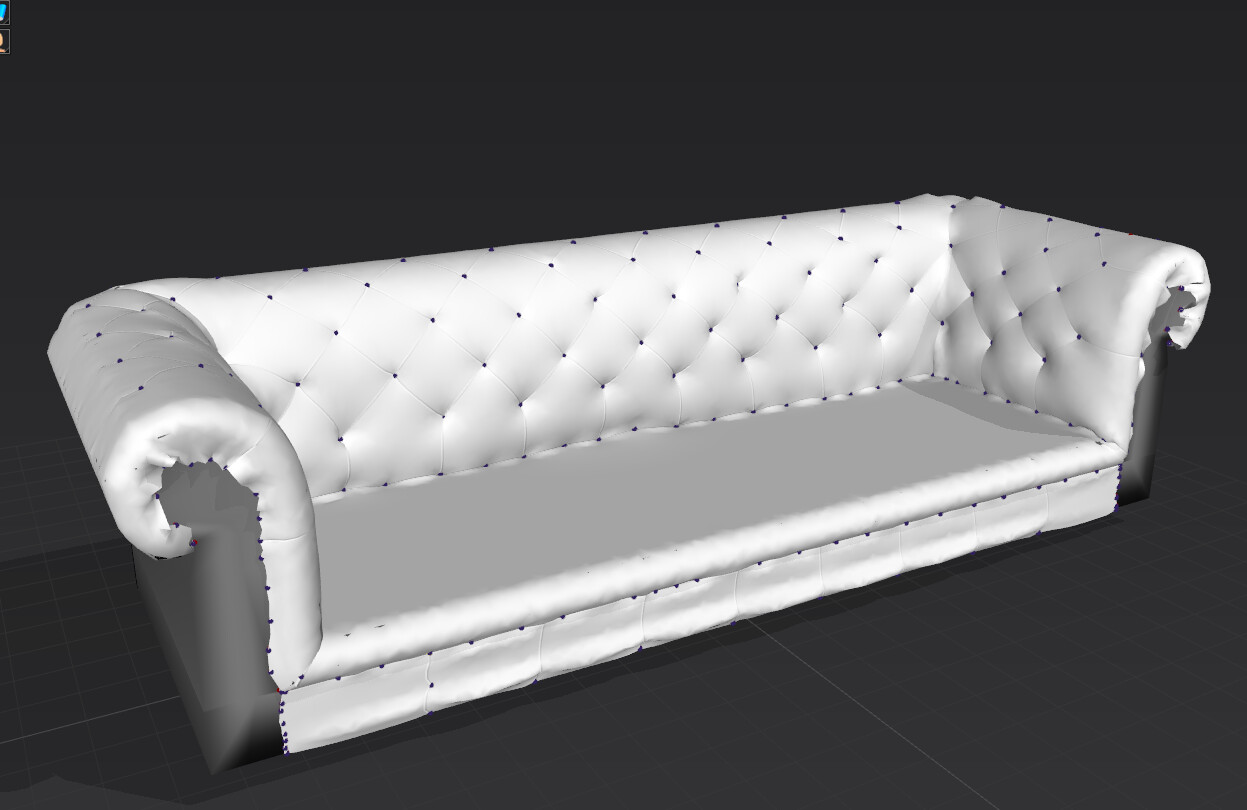 For starters, I used the couch I had blocked out as an avatar in Marvelous Designer.  This ensured that the couch I wanted to use would follow the same proportions as I had originally intended.

Next, I analysed the patterns in the couch to replicate them within Marvelous Designer.  With MD,  I was luckily able to fall back on previous sewing experience, so I found it self explanatory.

In production I opted to potentially save on polygon count and time by leaving the sides without cloth, and to inset some pieces in the front over top the messy edges. I also found out later that Marvelous Designer has buttons, and that made my day.

Currently, I'm working on these inset pieces.  Once these are complete, I will be able to bring the entire work into Zbrush to merge meshes and add greater tension and cloth folds.