This month is one of fixes. 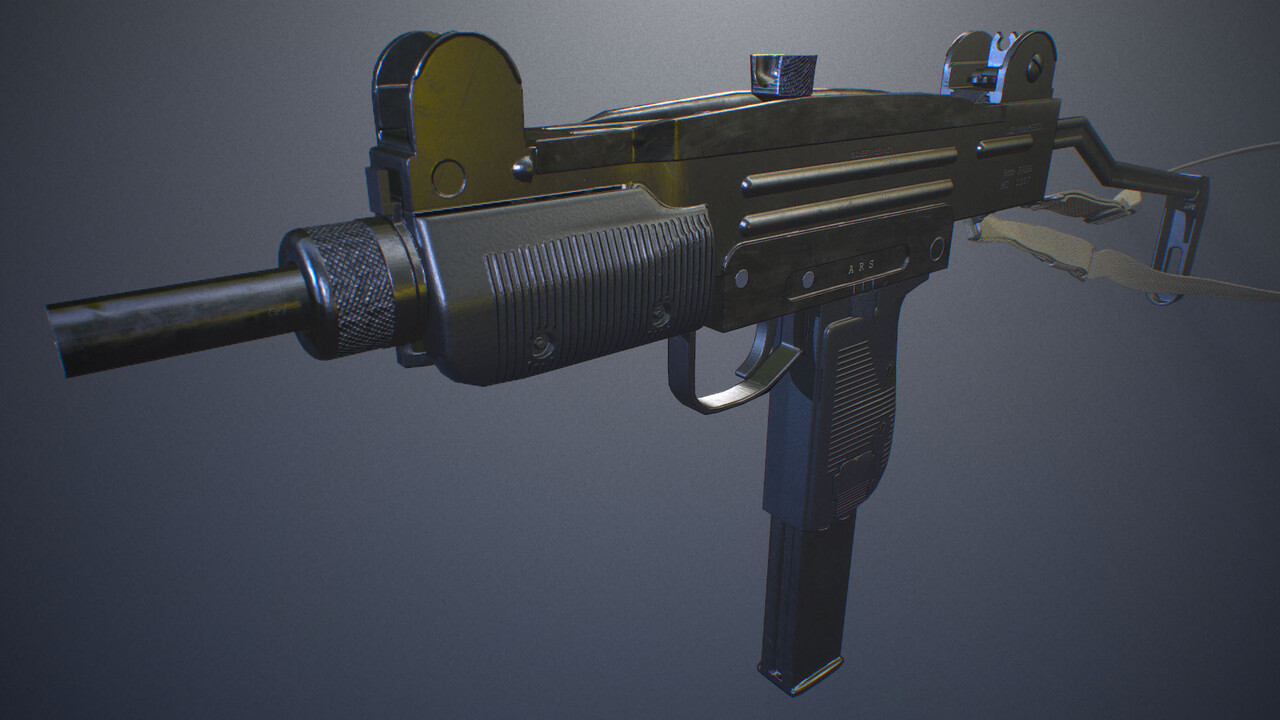 In feedback on my gun two things were key:  bake errors, and lighting blandness.  In September I became more acquainted with Marmoset Toolbag, which was the answer to both of these issues.  I had been using Substance Painter to bake, but with previously mentioned tools in Marmoset that allow to project normals and adjust the cage on the fly, it clearly is more adept.  My previous images of the gun were also taken with Iray in Substance Painter.  Here is an Idea of the difference below: 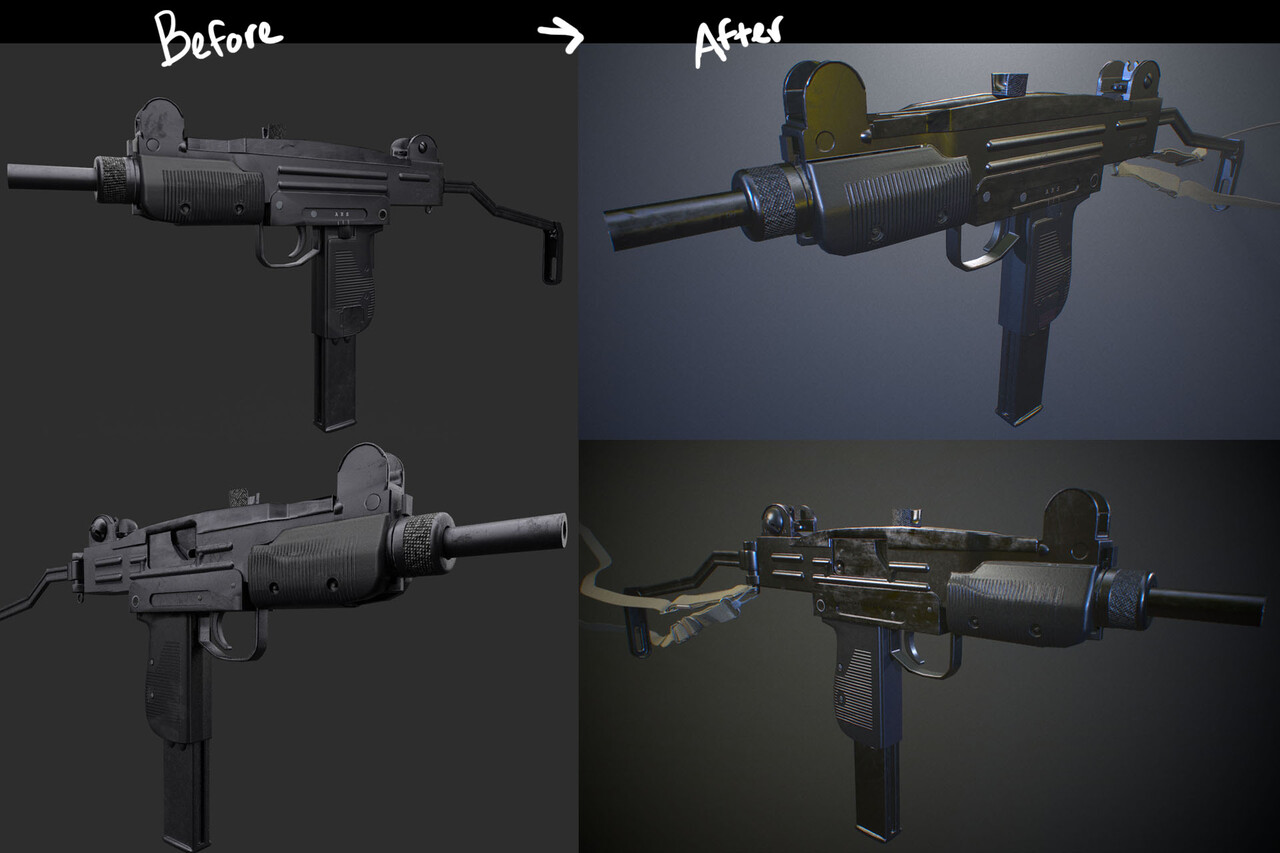 Beauty is in the eye... of the camera you set-up (Badumm chh).  As you can tell, I modified some of the textures while I was at it. 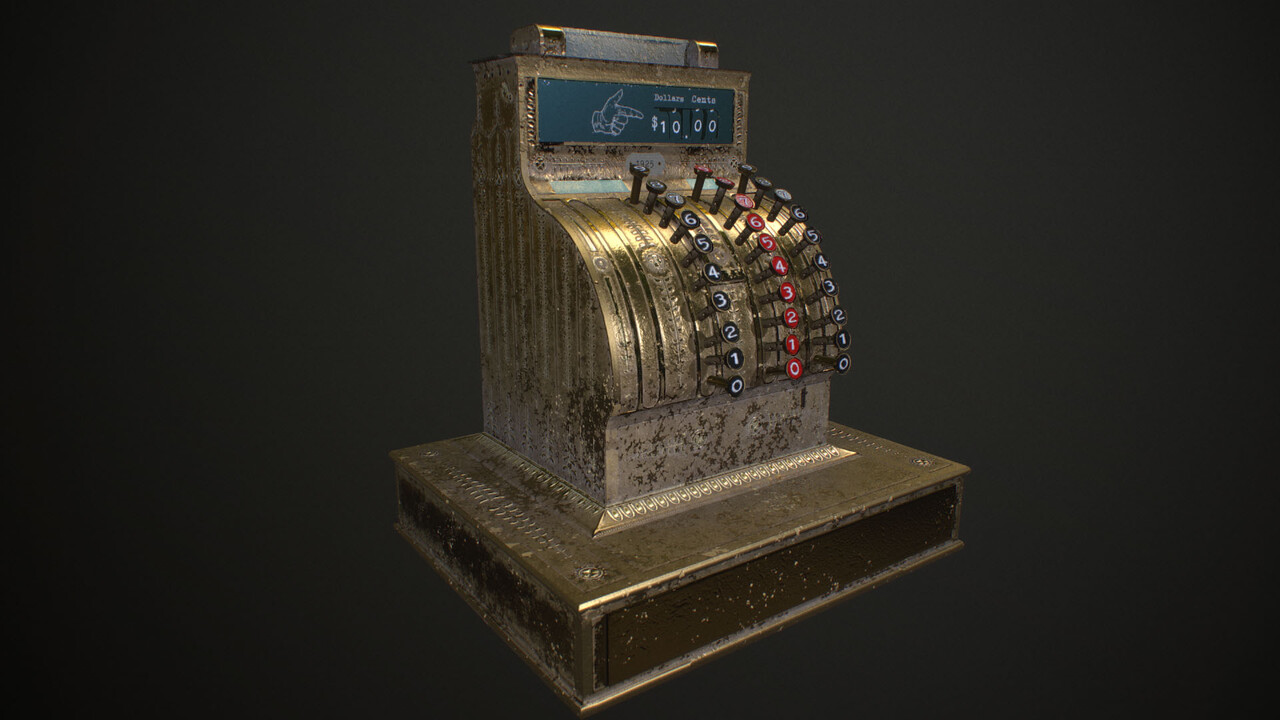 I got some feedback from my Candy shop scene that having a breakdown of this cash register might be a good idea!  So I decided to make some perfectionist changes to really call it "done".  I'd gotten feedback that the register, as a main prop in the scene, should get a full texture sheet despite breaking the texel density a little.  So, I redid the UVs, and added a feature.

Previously I'd left out a display for the actual numbers on the register, so before finishing them up I decided to make them and make them functional.   Each number slot is actually an 11 sided wheel - numbers 0-9 with an additional slot that is blank.  Since the wheel is used for all 4 number slots, a blank spot allows for there to be a "empty" slot without using a zero (ex: "$  .10" rather than "$00.10".

Overall I'm really happy with this register now.  There are some things I could theoretically change but I'm going to move on to the scene in the coming month. 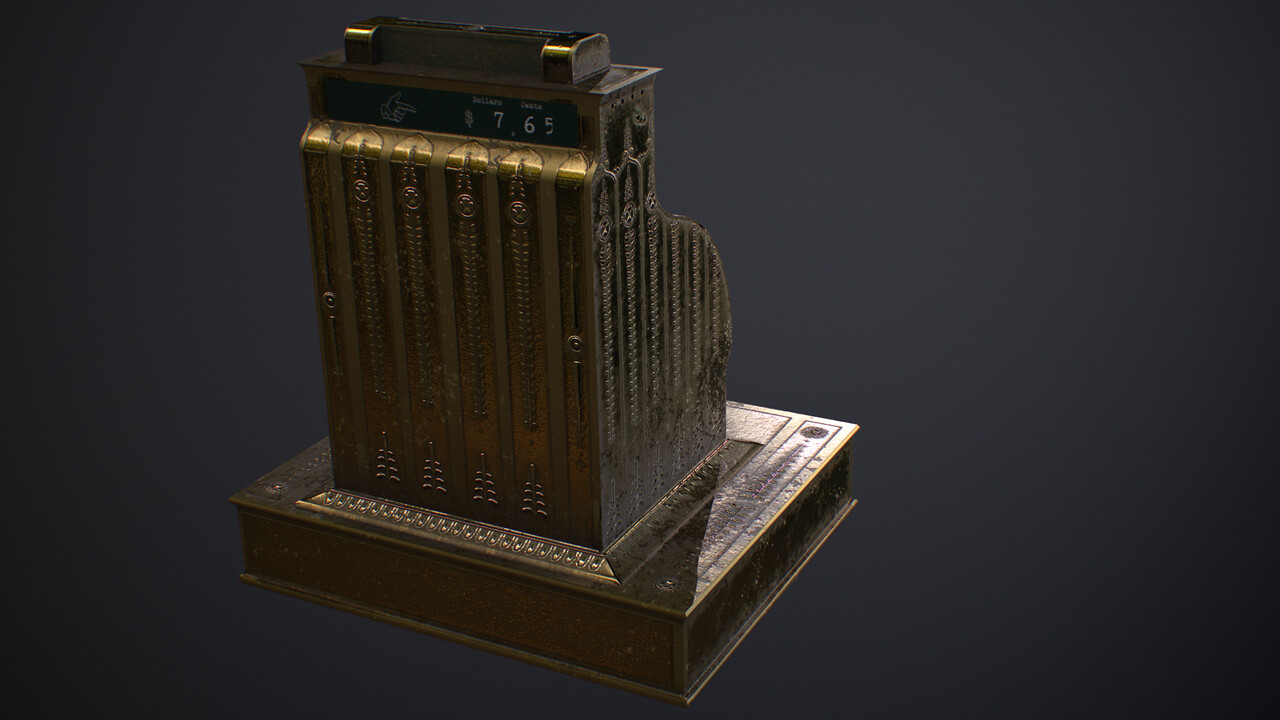 In September I got through to an exciting point with two separate projects.  Capone's Candies is a major addition to my portfolio - showing off the extent and breadth of what I know.  That being said, it is vital to change and iterate as more and more eyes analyze it.  I'd like to break down where I started from, and what was suggested. 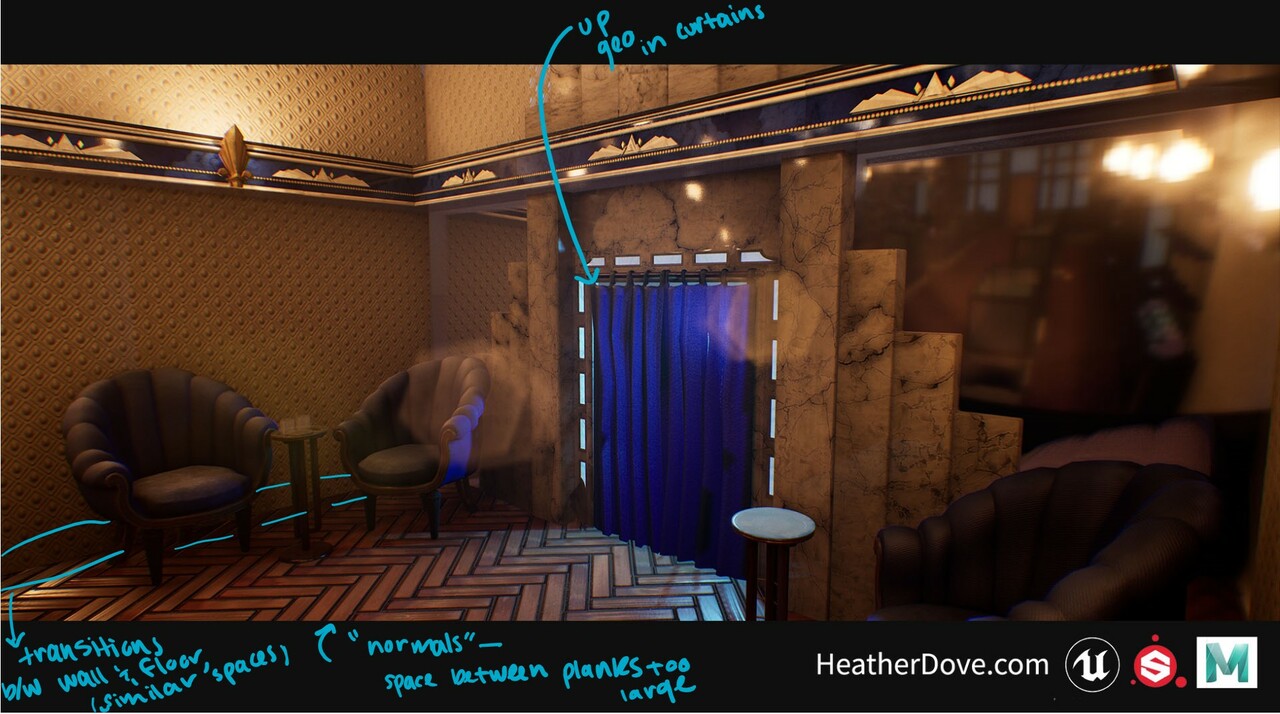 The changes with the biggest visual impact  are about transitions between planes, and breaking up tiling materials. 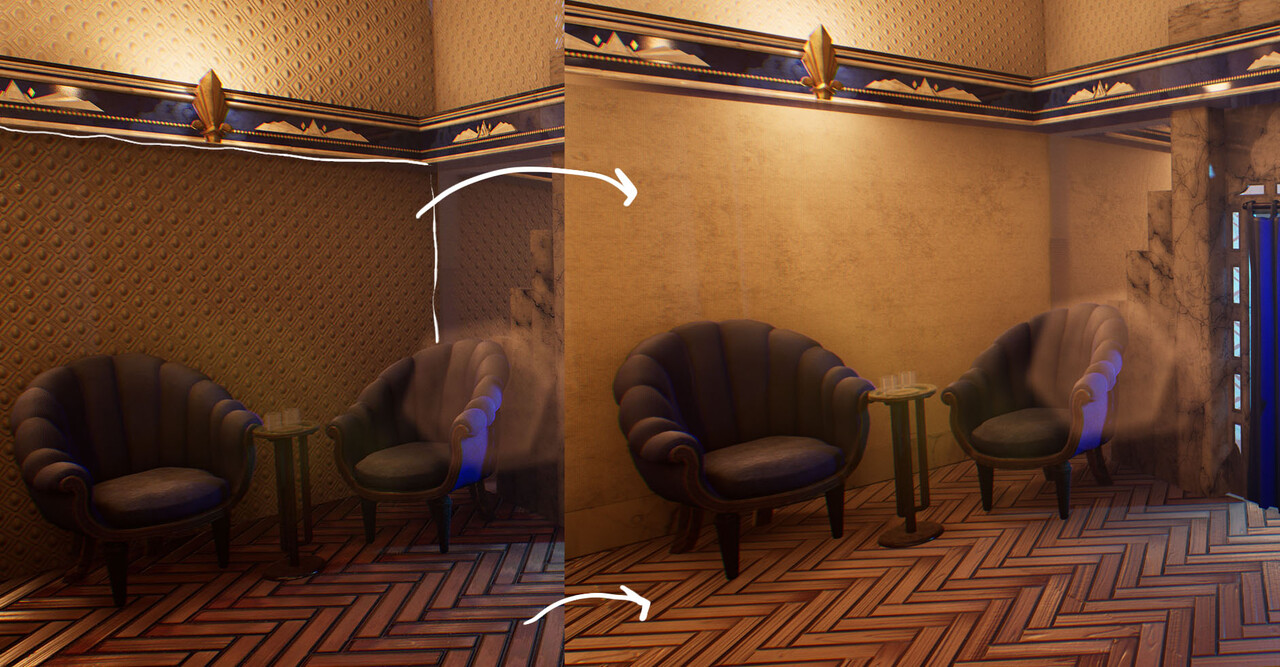 As you can see, I chose to continue the wall with a similar tone, just a different material.  To accomplish this, I changed the sizing of the wall and floor planes (which is more of an organizational note) to be a little more "modular friendly".    My hopes is that while this does break repetition a bit, it keeps the focus off the walls and on the objects.  The bottom of the wall also has a repeated molding from elsewhere in the room, but it might be a bit too *subtle*.  I haven't decided.

As seen in the above image, I also adjusted the floor to address a critique on the space between the boards.  Seeing it laid out this way is one of those "how'd I miss that??" moments.. Might even need to lower that space more potentially. 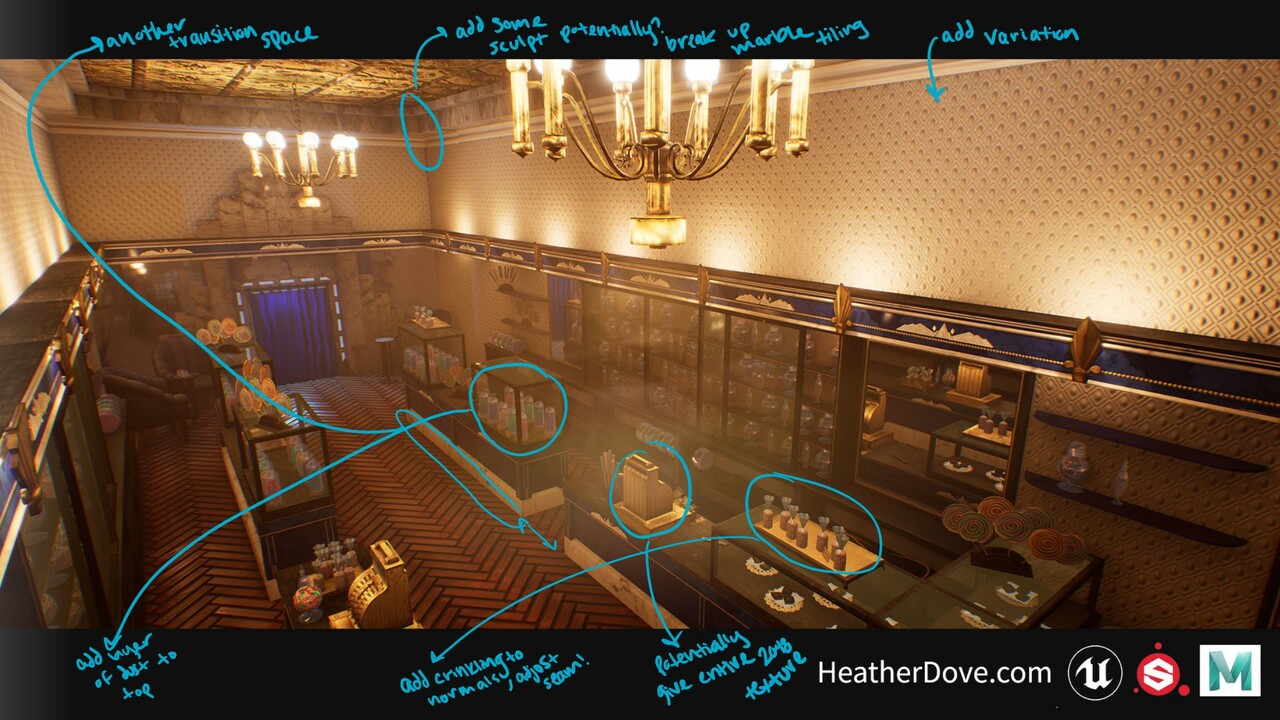 Now some of the notes in this image I have addressed (or have begun to), and some are things I will cover in the next month.

I've begun adjusting the "crinkling" suggestion for the packaging the candy corn is in.  I've also begun looking at different approaches for making the candy in the jars look more dusted.  Neither of these things I've gotten to a happy place with, so they'll most likely debut next month.